I’m trying to get back into the routine of posting more regularly on here, this post is quite belated but I’ll be putting on some more stuff from the past few months too.

Soon after Christmas, I arranged to have a meet up with Simon Roddis at Carsington Water.  I met Simon briefly at Hen Harrier Day in August, and I have spoken to him lots on Twitter.  He is at Carsington practically every day, and over the past weeks there had been a couple of Great Northern Divers which I was interested in seeing.  My mum and I met with him at 8:30am from Stones Island, where we quickly managed to pick up the adult diver in the distance, a bird that has been returning to the site for the past few years or so each winter.  We had better views of the juvenile bird, which came in much closer to shore and showed really well, the closest I’ve ever seen one.  Other birds of note were 2 Ravens, an overwintering Chiffchaff and several Willow Tit. 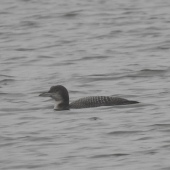 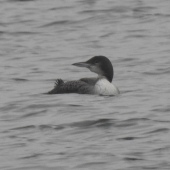 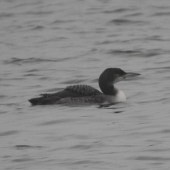 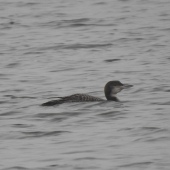 We watched the divers for about an hour before moving on to the Wildlife Centre, where from the viewing screen Simon managed to find a Jack Snipe, a lifer for me!  I got great views from Simon’s scope but as soon I got my camera out it typically hid (though still slightly in sight) in the grass.  After that it soon disappeared and after unsuccessfully trying to relocate it we had a look for a Cetti’s Warbler in reeds nearby, where one had recently been singing.  Cetti’s are quite rare birds at Carsington, but we unfortunately couldn’t find it. I had also had a message from David Walsh the night before, saying he would be at Carsington too.  I have met David on both BTO camps I’ve been on, where he helped out.  He is a really enthusiastic birder from Suffolk and he had been staying with his daughter in Nottingham, so I arranged to meet him and show him the divers as he was there,  meaning I got second views of the juvenile bird.  Overall a very successful day of birding, and always nice to get some good birds in my home county!