For one of my Christmas presents, we went to the Cairngorms.  We stayed in Glenlivet, and the track up to the cottages was so slippery we couldn’t get up it in the car.  On the first day, we went to Loch Garten to see the crested tits.  On the way there, we saw a roe deer and a red grouse.  We had a walk in the woodland to get there.  There was a lot of snow, and there was a frozen lake.  We were very lucky to hear a capercaillie, a rare type of grouse.  They make really unusual sounds.  It sounded quite a way off.  While we were walking, we heard a different tit call, which happened to be a crested tit.  We saw it hopping around in the trees with the coal tits.  In the summer at Loch Garten, there are ospreys which we had seen there before.  The whole Loch was frozen up and it looked amazing. We saw the crested tits on the feeders, and there must have been at least four of them.  I got some films of them, and it was really good to see them so close up instead of them hopping around in the treetops.  Their call sounds kind of like a coal tit crossed with a nuthatch.  There was also a great spotted woodpecker flying around and it was hopping along the ropes hung in the trees for the red squirrels.  I put some food out on my hand, and the coal tits came for it!

On the next day, we went to Lecht Ski Centre, but not for the skiing but because there are snow buntings that come to the car park!  We put some food down for them, and a pair came for it.  I managed to film them. They are about the size of a greenfinch.  They were scuttling around feeding, and they didn’t seem at all perturbed by our presence.  They were new species for all of us  and really good to see.  They are actually more white in the summer, and they’ve much more buff on them in the winter.  They breed all around the Arctic Circle.  We saw some groups of red grouse flying over. After this, we had lunch and travelled to the Moray Firth.  We had read that thousands of long-tailed ducks and scoters roost there.  We had a walk at Culbin Forest, and there was a beach, where our dog, Elk, found a dead pilot whale and rolled in it!  We went to Burghead Bay to see if we could see the ducks.  We saw some oystercatchers in a playing field, sensibly staying away from the extremely windy sea.  We did see a long-tailed duck, a female, diving close to the shore.  It was a good sighting and I managed to film it.  We also saw a pair of eider, also a type of sea duck.

Before heading back home on the 1st January, we went to Glenmore Forest Park, because the red squirrels are fed there.  We saw their tracks all around in the snow, and I briefly glimpsed one running into the woods.  We had a better view of one soon after, and I managed to film it.  We went to the ski centre as there are sometimes ptarmigan there, but we didn’t see any.  After that, we went to Loch Morlich which was nearby.  The beach had snow on it.  We saw a male goosander and a pair of goldeneye, a male and a female. Next, we went to the Insh Marshes, RSPB.  We had read there was a small hen harrier roost and loads of whooper swans.  We went to Loch Insh, and saw more goldeneyes.  As they flew in, they looked remarkably like puffins!  Daddy briefly saw a pair of golden eagles circling over the mountains, but we didn’t see them.  There was a herd of red deer that we saw.  We went on to the RSPB Reserve and it was so misty that we couldn’t see any thing!  We had a walk and found a frozen heron’s wing.  We saw a few whooper swans grazing in a field. 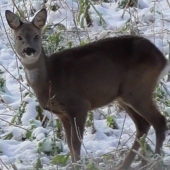 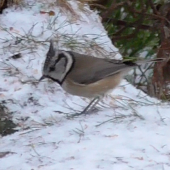 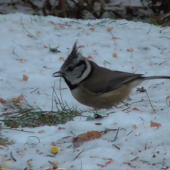 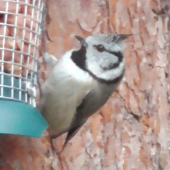 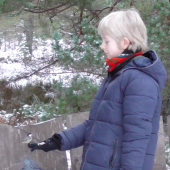 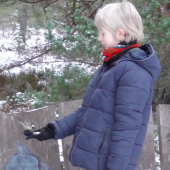 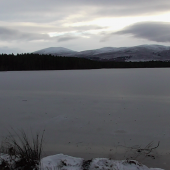 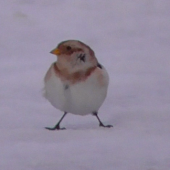 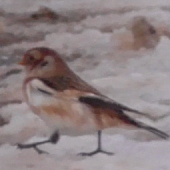 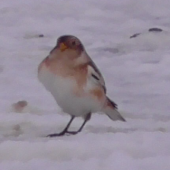 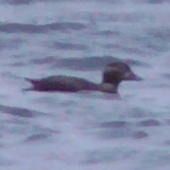 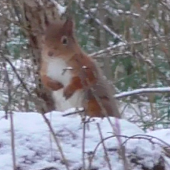 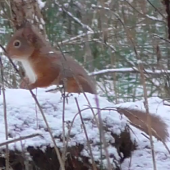 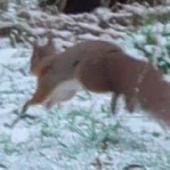 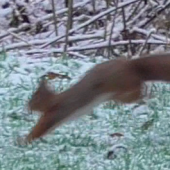 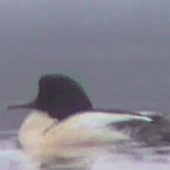 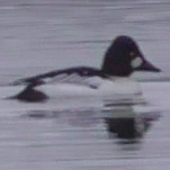